You are here: Home / Dining Room / Gallery / Blacker Side Chair

This is an interpretative version of a Greene and Greene Side Chair from the Blacker House. As you can see from the images, the many details make this piece very labor intensive.

It is the subtle and thoughtful rendering of those details that can make or break a good Greene and Greene piece. If the details are not given sufficient thought, they can at best appear lifeless or at worst appear as a mere afterthought – not relating to the design as a whole.

The “brackets” come to life with a slight pillowing of the surface. I see them as giving visual strength (in reality not much real support). If they are flat, undersized or not properly shaped they appear (to my eye) anemic.

I see the “leg indent” detail as a device used to anchor the design to the ground, just as the classic claw and ball foot does. The “indent” pushes down and transfers the weight of the piece to the very bottom of the leg. That bottom portion of the leg (below the indent) is thus receiving the entire weight of the piece. There must also be a sufficient amount of mass below the indent to visually support the given weight. The slight taper below the supporting mass serves to visually contain the weight and not disperse it to the floor.

The “leg indent” feature is frequently (to my eye) misused. I often see it employed on large bulky legs (3″x 3″ or larger). The indent is a device used to increase and direct the visual weight of a design – large bulky legs already have an abundance of mass – adding the indent only confuses the design’s sense of weight.

Another common mistake is to omit the mass and taper below the indent. To my eye, this negates all the efforts of the indent. By omitting this final portion of the detail, the weight is not contained within the design itself but fettered away to the floor and wasted.

Most well designed chairs are wider in the front than in the back, producing side seat rails that are at an angle. We are all accustomed to that angled seat rail connecting to a square front leg – so it appears normal to us. When the front leg is shaped to continue the angle of the seat rail, the effect is much more pleasing. 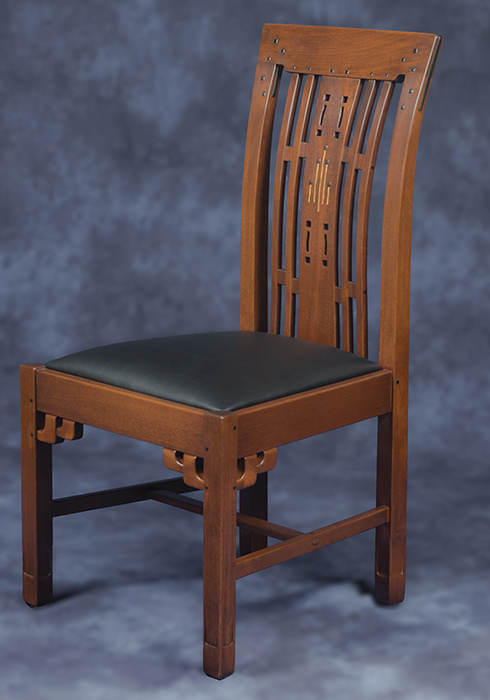