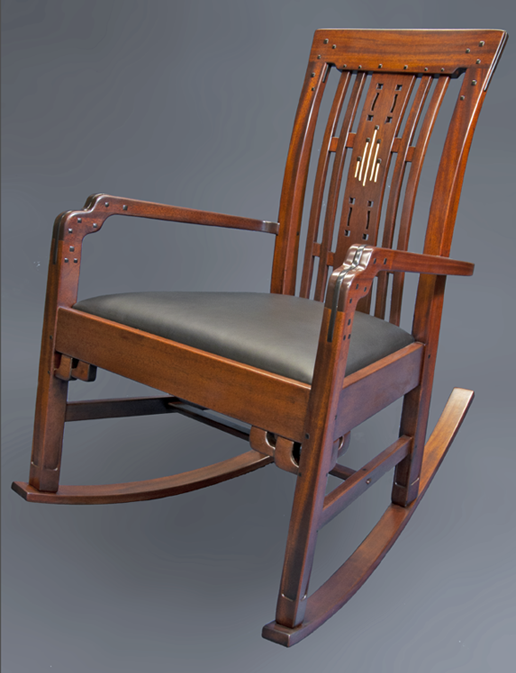 Greene and Greene designed three chairs in the same motif for the living room of the Blacker House: a side chair, a rocker, and an armchair. Of these, the armchair is deservedly the best known. It is one of my favorite G&G pieces. It is also a true challenge to build! It stands as a testament to Charles Greene’s genius as a designer and the Hall brother’s (Peter & John) consummate skills as master craftsmen.

The original arm chair is solidly anchored to the floor with arms that reach out in one uninterrupted motion to meld with the front legs. Charles Greene’s masterful use of negative space and graceful curves gives the design a perfect blend of the masculine and feminine.

My design challenge was to relate the arms (that had been anchored to the floor) to the curve of the rockers. To do this I splayed the front and back legs out slightly to give some illusion of “anchoring” to the rockers – sort of like spokes relate to a wheel. Splaying the legs too much would make the design appear “cartoonish.” It took some re-drawing to find the right fit.

The Blacker armchair alone is an incredibly challenging project. The intricate and complex detailing of its back, though demanding, is perhaps the easy part. The point at where the arm meets the front leg is especially challenging. As the arm starts out from the back it is square in section, but as it morphs into the leg it must transit to parallelogram. With this transition, the proud ebony spline that connects the leg and arm must make the change as well – this is not for the faint of heart!

Add to this already difficult project the multiple compound angles of the splayed legs and it becomes a sort of super challenge. This rocker was one of the most difficult (and incredibly fun) projects I have ever undertaken.