Darrell was born in 1950 in Wenatchee, Washington. He currently resides in Seattle  with his wife Terry. He has three children, seven grandchildren and one great grandchild.

He started his career making and selling small wooden items at Seattle’s Pike Place Market. To broaden his experience, he went on to work for various custom shops throughout the Puget Sound area. He was one of the first furniture makers to have a website – hence the furniutremaker.com domain name.

Design Work
Design has always been his primary motivation. The influence of Greene & Greene can clearly be seen in Darrell’s work and is what he is best known for. Over the years however he has drawn upon the work of many others. Early on, he was influenced by the graceful lines of James Krenov’s furniture and the masterful use of balance and proportion of Thomas Chippendale. More recently he has found aspects of the Mid-Century Modern style to admire.

Darrell’s  work has appeared in various galleries; has been featured in both local and national newspapers, magazines, and books; and in private collections throughout the United States and Canada.

Darrell also writes and lectures about design, woodworking, and the history of Greene & Greene. He has written articles for Home Furniture, Today’s Woodworker, Fine Woodworking, Woodwork, Popular Woodworking, American Woodworker, Woodworker West, Style 1900, British Woodworking, 360 Woodworking, and Australian Wood Review. He is especially proud of an article he co-authored with Ted Bosley (director of the Gamble House) for the Society of American Period Furniture Makers: “Design Without Compromise”

Darrell is well known for his innovative woodworking jig and tool designs. His Square Hole Punch is currently in production by Lee Valley Tools.

In 2011, Darrell was voted on to the Board of Directors of the Friends of the Thorsen House (FOTH), a restoration effort of one of Greene & Greene’s Ultimate Bungalows.

He is now semiretired, but still spends much of his time in the shop. He no longer accepts large commissions but on occasion can be lured into accepting a  small project. Darrell  mostly explores new designs ideas these days by building pieces for his family and producing “spec” pieces for sale here on his website. 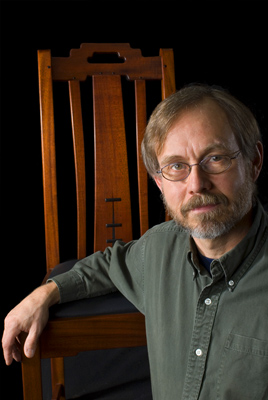