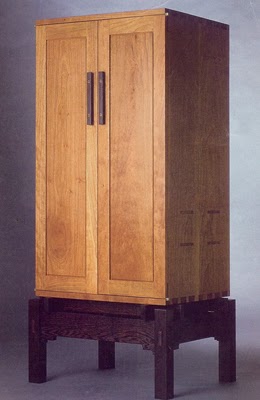 The Furniture Begets
Much of my work is spawned by my previous work. I like to call it “The Begets”.   One design begets the next and in turn that one begets the next one – and so on.  The line of begets can be rather long and intertwined.
A beget starts out as an idea.  The idea is usually some shape or theme found in my environment.  These ideas are not available upon demand. They are most often spontaneous and come uninvited. They are a gift.
Once an idea has solidified and the initial design is complete – the variations (begets) on a theme can begin. Begets can materialize in a number of ways. Occasionally they are self-emanating, as when I revisit past work and see something that could have been done better. Many times the impetus is client driven in the form of a request for a companion to an existing piece.  Sometimes there is the need to re-purpose a detail or theme to a different function.
The begets have been good to me. They have forced me to seriously think about context and given me a deep appreciation of the work of Greene & Greene: the masters of detail and  context. Because a detail works well on one design, does not mean it will do the same in another setting.   Cut and paste – doesn’t cut it. Each new use must be given careful thought.  This is the basis of my “Furniture DNA” scheme, which I have written about in various articles and blogs.  It is also the underlying groundwork that forms a personal style.
For our purposes here, I want to narrow the focus of discussion to a just a few specific design elements and their derivatives (begets).  This is not meant as a catalog of all my influences nor is it a detailed discussion of an element’s nuance of change as it  transits  from one design to the next. This is nothing more than a brief stroll through my work – selectively pointing out some of the lineage.
A beget doesn’t necessarily take the shortest route from point “A” to point” B”. The path leading to my Rafter Tail designs has been a rather long and crooked one. It started about 20 years ago with one of my early Audio Cabinet designs.  At that time, my work showed a lot more Krenov influence. The case for this piece set upon a grid-work which in turn set upon the base.
The idea of a base with an intermediate grid work has been stuck in my head ever since. I finally revisited the idea a couple of years ago in a design for a pair of speaker stands. In the interim my design skills had improved and my influences had moved on. This time around the grid-work was infused with G&G DNA to become my “Rafter Tail” series.

The Aurora Bridge (Seattle) has been the inspiration for numerous begets. The initial spark for this line was born out of both desperation and frustration. It was pivotal point for me. At the time, the economy was in a tailspin and I had a burning desire to go beyond the mediocrity which I felt stuck in. I have written about this in both magazines and blogs and because of that I will not take up more space with it here.

Essentially the Aurora line takes a gentle arch (often found in bridges) and introduces it to the design. What follows is the interaction with the other elements of the piece. This was the beginnings of my  DNA scheme in which  nature is imagined to be the force driving the design.
The Fremont begets are closely related to the Aurora begets – in fact you might say they are maternal twins.  Seattle natives may get the connection without the bother of my explanation.  The Aurora Bridge joins the Queen Anne neighborhood with the Fremont District.  When the inspiration for the Aurora line hit me – I
was standing on the Fremont side.   The reason for the Fremont branch came when I designed a 2nd Aurora Style Nightstand and did not want to have a #2 next to the design’s name. This piece features a tapered leg which was initially inspired by a Charles Limbert detail and was first used on my Aurora Chest of Drawers.  This time though, I added a little out-turn at the top of the leg, which sort of reaches out to support the top.
As happens, differing ideas, in due course, can meet and beget yet another line of begets.   Currently on my computer is a design for a stereo rack.  Central to the design is a Fremont style tapered leg, but with a cloud-lifted notch (that cradles the top) which is similarly found in my rafter tail pieces.   The initial design is yet un-built and may take a few turns before it makes it to my work bench.
Ideas for new begets come to me in their own time and on their own terms. Sometimes an idea goes nowhere. Or at least it seems to go nowhere – it may bounce around in my subconscious for a very long gestation period – then re-appear. Recently the Space Needle has caught my attention.  Stay tuned and have patience – something  may or may not mature.
https://furnituremaker.com/wp-content/uploads/2014/01/1-1.jpg 400 260 Darrell https://furnituremaker.com/wp-content/uploads/2015/10/logo_slate_transparent.png Darrell2014-01-27 18:04:002014-01-27 18:04:00
5 replies

Want to join the discussion?
Feel free to contribute!